Bhushan’s Advocate on Record Kamini Jaiswal had filed an application yesterday requesting Court to defer Bhushan’s sentencing hearing. The application notes that during suo moto criminal contempt proceedings, the Supreme Court is akin to a criminal trial court. The procedural and substantive rights of the accused derived from Article 21 must be extended to Bhushan as well. It further adds that Bhushan is entitled to file a review of the judgment within 30 days from the date of the judgment. In light of this, he requests the Court to defer his sentencing hearing until his review petition meets its end.

Sr. Adv. Dushyant Dave began his arguments based on this application. He reiterated that Bhushan intends to file a review petition before the expiry of 30 days and requested the Court defer the hearing. However, the Bench was not inclined to grant this. J. Mishra asked: ‘Can you tell us why a constitutional order cannot be passed? In the event, we impose punishment it will not be implemented until the review is decided.’ J. Gavai further queried as to why the review petition had not been filed already.

Dave responded by highlighting that it was within Bhushan’s right to file the review within the 30-day limit. He added that Bhushan’s decision as to when to file a review was not informed by J. Mishra’s retirement in two weeks. The Court referred to its decision in Vijay Kurle in which a similar request was rejected. Moreover, the Bench assured Bhushan that the sentencing verdict would become operational only once the review petition was decided upon.

The Court insisted that it would hear on sentencing.

Prashant Bhushan Issues a Statement to the Court

Sr. Adv. Rajeev Dhavan took over and noted that Prashant Bhushan wanted to address the Court on his tweets. He issued the following statement: 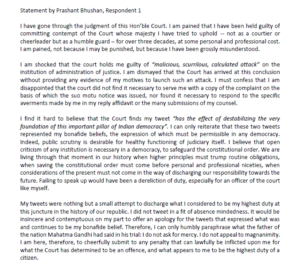 Dhavan resumed his arguments. At the outset, he requested the Court to consider Bhushan’s track record. As a public-spirited lawyer, Bhushan created the Forum for Judicial Accountability 30 years ago and has actively worked towards exposing corruption.

Then, Dhavan relied on S.13 of the Contempt of Courts Act, 1971 (‘Act’) to claim that the Court must prove ‘substantial interference with justice’ to punish Bhushan. He added: ‘How can one person bring down the majesty of the Court?’. The core of the contempt case was to demonstrate that Bhushan’s tweets substantially interfered with the administration of justice.

Dhavan moved on to S. 13 (b) of the Act to state that truth is a defence for contempt, and that it applied to Bhushan’s tweets.

Justice Mishra noted that Bhushan’s statement did not contain an apology. He turned to Attorney General K.K. Venugopal and asked if the Court could give Bhushan a couple of days to reconsider his statement. The Attorney General, highlighting that Bhushan has done ‘tremendous public good’ noted that Bhushan must be given time to reconsider. He went on to even state that Bhushan must not be punished for his tweets, and that he has a list of judges who claim corruption in higher judiciary and have concerns about India’s democratic future. The Court refused to engage with the Attorney General on his line of arguments and reminded him that today’s hearing was about sentencing and not a review of their judgment.

However, Bhushan noted that it was unlikely that he would reconsider his statement and it might be a waste of court’s time to give him time to revisit his statement.

Through its order, the Court has given Bhushan time till August 24th to apologise unconditionally to the Court. If he does not do so, the matter will be listed on August 25th.