Home > Cases > Constitutionality of Sedition > Sedition #3: SC Asks Union How Misuse of S124A Will Be Prevented

Sedition #3: SC Asks Union How Misuse of S124A Will Be Prevented

On May 10th, 2022, interruptions, insinuations, and indignant rebuttals flew across Courtroom 1 of the Supreme Court. The Court was deciding whether it should defer hearings in the challenges to Section 124A of the Indian Penal Code, 1860. By the end of the day’s arguments, the Union appeared to have convinced Chief Justice of India N.V. Ramana and Justices Surya Kant and Hima Kohli to grant a deferral.

Section 124A is a pre-Independence law criminalising sedition with a maximum punishment of life imprisonment. It empowers the police to arrest accused individuals without a warrant. The petitioners—who include the Editor’s Guild, People’s Union for Civil Liberties, and Retired Major General S.G. Vombatkere—argue that the provision stifles free speech and expression.

An affidavit filed on May 9th, 2022, by the Union government, eight months after it was first issued notice in the challenges, requested the Court to defer hearings. The Union, including Prime Minister Narendra Modi, have started the process of having a ‘competent authority’ re-examine the provision. ‘Re-examination’, in this case, requires a legislative amendment to the provision, while the competent authority is the Parliament—this means re-examination could take months and potentially years. The Union sought that the Court hear the challenges after the process was  completed. Ramana CJI, who leads the current Bench, is due to retire in three months.

On July 16th 2021, Ramana CJI commented on the colonial nature of Section 124A, which punishes those who incite ‘disaffection’ towards the government. Concerned with its rampant misuse, Ramana CJI said that the provision is comparable to ‘a carpenter being given a saw to make an item, [and who] uses it to cut the entire forest instead of a tree’.

Following the day’s heated arguments, the Bench expressed an inclination to be ‘reasonable’ and defer hearings until the Union reexamined Section 124A. Ramana CJI specifically alluded to portions of the Union’s affidavit affirming the Prime Minister’s commitment to protecting civil liberties and shedding India’s colonial baggage. He appeared convinced that the Union was seriously considering the matter. 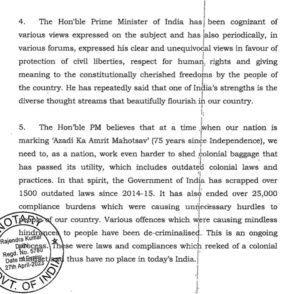 The Bench expressed concerns over misuse of the law in the interim. After much deliberation with the other Judges, Kant J asked the Union if it could issue directives to local authorities to stop filing FIRs under Section 124A during the re-examination period. Kohli J agreed.

Solicitor General Tushar Mehta, representing the Union, argued that the appropriateness of a sedition charge must be determined by the High Courts on a factual basis. It would be imprudent for the Bench to pass blanket directions in this matter. Mr. Mehta stated that the law was misused by State government officials, not the Union, and that the Judgment in Vinod Dua (2021) laid down sufficient guidelines to prevent misuse.

The Bench remained steadfast in its concerns about misuse. Kant J stated that the Judgment itself was insufficient without directives from the Union to implement it.

Mr. Mehta will present the Union’s response on May 11th, 2022. He stated that the Bench cannot, however, order the Union to stop using a penal provision before it was declared unconstitutional.

Legions of lawyers gathered on the petitioners side of the Court today. While Senior Advocates Kapil Sabil, C.U. Singh, and Gopal Shankarnarayanan took the stand, the likes of Vrinda Grover, Dr. Rajeev Dhavan, Prashant Bhushan, Salman Khurshid  and their many juniors gathered around them, hanging breathlessly on to every word of the proceedings. Tushar Mehta cut a lone figure—accompanied by two junior lawyers, he locked horns with the petitioners on every point, consistently pushing for a deferral.

The galaxy of senior advocates challenging Section 124A strongly objected to the deferral. Mr. Shankarnarayanan argued that an affidavit by a member of the Executive cannot be considered the word of the Parliament. He further pointed to a recent pattern in the Union’s litigation strategy. In the Right to Privacy case at the Supreme Court (2018) and the 2022 marital rape hearings at the Delhi High Court, Mr. Shankarnarayanan stated that the Union had submitted affidavits when the hearings had nearly concluded. The affidavits stated its intention to reconsider the laws in question and sought the deferral of proceedings. Gravely offended by this insinuation, Mr. Mehta interrupted Mr. Shankarnarayanan to point out a pattern he had noted in the petitioners’ litigation as well, but was stopped by the Bench.

Senior Advocate Kapil Sibal stated that Mr. Mehta had mischaracterised Section 124A as a law that protects national sovereignty and integrity. Critiquing the colonial provision’s conflation of the State and the government, Mr. Sibal drew a distinction between the two bodies. He said that other provisions punish actions that endanger the security of the State. Section 124A protects the government from criticism and, according to Mr. Sibal, it is a virtue to be disaffectionate towards the government.

Prior to the Union’s affidavit seeking deferral, the Bench was scheduled to hear arguments on referring the challenge to a larger 5- or 7-Judge Bench today. A reference appears out of the question currently, with the Bench granting the Union time to reexamine the provision. Mr. Mehta’s response to the potential misuse of Section 124A during the re-examination period on May 11th will determine whether the Bench will provide interim relief.