On Monday, June 7th, the e-Committee of the Supreme Court announced Draft Rules on Live-Streaming and Recording of Court Proceedings for High Courts. The e-Committee is inviting inputs and suggestions on the draft by June 30th. Once finalised, High Courts will be able to use these Model Rules and implement it within their jurisdiction.

These rules will introduce uniformity in livestreaming across High Courts, if all High Courts adopt them. It states the aim is ‘greater transparency, inclusivity and [to] foster access to justice’. The Court stated that the principles in Swapnil Tripathi v Union of India should be followed.

All matters will be live-streamed unless it falls within an exception. The exceptions include:

The bench can also choose to pause live streaming when dictating an order. The decision of the Bench on whether to livestream will not be justiciable. However, it should follow the principle of an open and transparent judiciary. There will be a delay of 10 minutes in the livestream.

However, all proceedings, even those which are not live streamed, will be recorded and archived for at least 6 months. They may be uploaded later.

The livestream cannot be recorded, screenshot or shared by anyone without prior permission. Recordings also cannot be used, even by the media. This follows the practice in apex Courts such as in the United Kingdom and the United States which restrict the sharing of edited clips of proceedings. There will be dedicated rooms in the High Courts from which the live streams can be watched. This will accommodate persons with disabilities. It will be open to researchers, staff, litigants, academicians and media who are authorised. The rules also make provisions for streaming it on the website and other streaming platforms.

It is not clear whether Courts can only choose to livestream to the rooms within its premises. The Gujarat and Karnataka High Courts, which have begun livestreaming, have been using YouTube. Meanwhile in the UK and US, the recordings are uploaded on the Court’s website. The Kenyan judiciary uses social media and TV news streams. The Supreme Federal Court of Brazil has its own TV channel, Justicia. 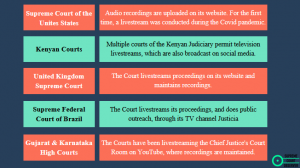 The Rules were framed with the help of judges from the High Courts of Delhi, Bombay, Madras and Karnataka. Suggestions can be sent to ecommittee@aij.gov.in. The rules come as petitions are pending in the Allahabad and Madhya Pradesh High Courts for livestreaming.

Last month, the Supreme Court launched virtual access to the media for its courtrooms. During the launch CJI NV Ramana noted that livestreaming at the Supreme Court was under ‘active consideration’. The Court had agreed to it in-principle in Swapnil Tripathi in 2017. The preparation of the Model Rules is likely to speed up the process, as more High Courts open up. It is likely the Supreme Court will follow either simultaneously or soon after.