As per the list published on 1 October 2019, 16% of all Supreme Court Senior Advocates volunteer to do legal services.

Article 39A of the Constitution places a responsibility on the State to ensure that all citizens enjoy equal opportunity to approach the courts. It stipulates that free legal aid should be secured for disadvantaged citizens.

To ensure its aim of providing free legal aid, the SCLSC maintains a ‘panel of advocates’, who voluntarily file and argue cases on behalf of disadvantaged litigants. The panel comprises Senior Advocates (Sr Advs), Advocates-on-Record (AoRs) and Non-Advocates-on-Record (Non-AoRs)

The SCLSC relies on advocates voluntarily offering their pro-bono services. It currently reports having 66 Sr Advs and 109 AoRs (Non-AoRs not reported). 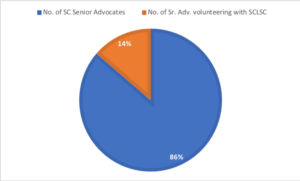 Proportionally, the SCLSC has very many fewer AoRs. Only roughly 4% of AoRs on the Supreme Court’s May 2020 list volunteer for the SCLSC. The SCLSC has 109 AoRs – the Supreme Court recognises 2777 AoRs. This may reflect that it is more difficult for AoRs to volunteer their time, as they generally lack the same financial security that Senior Advocates enjoy.

Another explanation may be that the SCLSC simply doesn’t require many more than a 100 AoRs. Potential litigants who lack the means to approach the Court, may not be aware of the free legal aid that the SCLSC provides. As a result, relatively few litigants may be seeking to avail of SCLSC services.

Currently, it’s difficult to draw any conclusions about whether the SCLSC has enough advocates on its roster, since the SCLSC doesn’t publish data about how many cases it takes up per year. Finding out likely requires a Right to Information request.