Justice Rohinton Fali Nariman is set to retire on August 12th 2021. He was designated as a senior advocate at the age of 37. It’s widely reported that CJI Venkatachaliah amended the rules to give him this designation at a very young age. 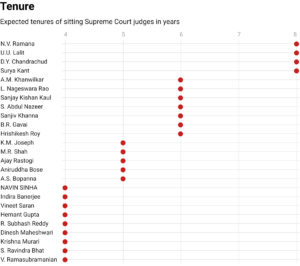 At the Supreme Court, Justice Nariman authored 307 judgments, writing an average of 43.9 judgments per year. When we compare this to a sitting judge who writes an average of 26.7 judgements per year, Justice Nariman’s output appears to be rather high. While numbers are useful to understand the judicial output of a judge, these do not necessarily account for the impact of the judgments. Justice Nariman leaves the Supreme Court after having written the second-highest number of judgements. His rate of judgements is the fourth-highest among sitting SC judges.

Most of Justice Nariman’s judgments were on matters dealing with different forms of taxation, which includes excise and customs at 14.3% of judgments. This is followed by matters on arbitration law (approximately 11.8%), civil law (8.2%), constitutional law (7.9%) and criminal law (7.7%). Incidentally, Justice Nariman’s practice as a lawyer was primarily focussed on commercial law.

In our next post, we look at Justice Nariman’s most notable judgments.