Home > Analysis > Pendency Rides High on the Second Wave, while Judgments Dip in 2021

The second wave of the pandemic has significantly shaped the statistical picture of the Supreme Court. We look at pendency, vacancies, number of judgments, and suo moto cases in the first half of 2021.

Pendency has historically been on a steady rise at the Supreme Court. However, the first half of 2021 has seen a steep increase of 6.3%. The data on pendency for each month is reported in the first 3 days of the month. So, we have included July to account for the pendency at the end of June.

Cases continue to be instituted, with easier access after the introduction of the ‘e-filing’ module. However, judicial time was restricted since the Court could not sit physically. The Court was opening gradually, with hybrid hearings taking place from 15th March. But with the second wave, the Court went back to hearing only ‘urgent cases’ from April 22nd 2021.

Pendency is measured at two stages. The ‘admission stage’ is where the Court considers whether a certain petition should be heard orally. It can be disposed of at this stage if various procedural requirements are not met. If admitted, oral hearings are conducted in the ‘regular stage’. Over the first half of the year, pendency at the admission stage increased by 10.06%, whereas in the regular stage, it fell by 2.55%. 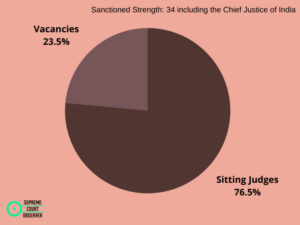 The sanctioned strength of judges at the Supreme Court is 34, including the Chief Justice of India. With the retirements of J Indu Malhotra, CJI SA Bobde and J Ashok Bhushan, and the death of J Shantangoudar, there have been 4 new vacancies since January 2021. This takes the total vacancies up to 8, and 26 sitting judges.

This leaves only one woman on the Bench, J Indira Banerjee, who is due to retire in August. There have been no collegium resolutions recommending appointments for any of these vacancies.

The number of ‘reported judgments’ is taken from the judgments uploaded on the Supreme Court of India website. This does not include all judgments, and does not indicate the number of cases disposed of in a given time period. However, it provides a general overview of the number of judgments pronounced by the Court.

As the Court continues to open once again, the number of reported judgments is likely to increase, and pendency will begin to be addressed. However, the unpredictable nature of the pandemic leaves very few things certain.

Note: ‘Reported Judgments’ is counted by looking at the serial number of judgments on the Supreme Court of India website when a search is done by date.