The SCO Team conducted a workshop at NSoJ on the Supreme Court and its role in India’s constitutional democracy.

On June 25th 2022, the Supreme Court Observer Team organised a workshop for the journalism students at the National School of Journalism and Public Discourse, Hebbal. The workshop introduced the students to the Supreme Court and its role in India’s constitutional democracy. It highlighted the importance of critical engagement with primary materials while looking at a Supreme Court case. The workshop was designed to show that a better understanding of the Court facilitates impactful journalism. 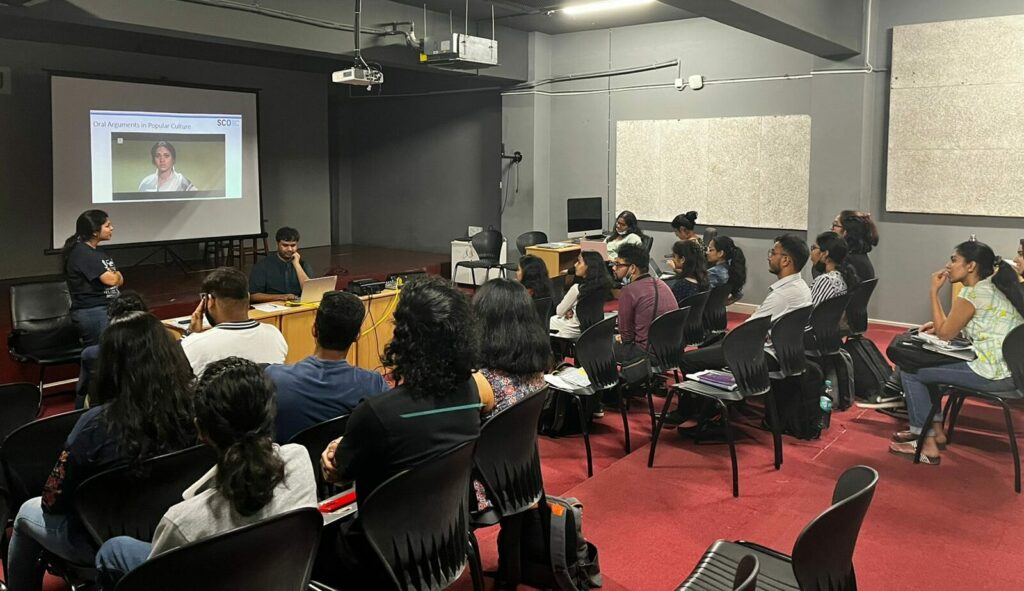 Next, Gauri took the students through the various elements of a Supreme Court case, from the people involved such as the parties, lawyers and judges, to the materials included such as written submissions, oral arguments and judgments. For a closer analysis of a case, the students were provided with the example of a recent petition in the Supreme Court challenging the constitutionality of sedition law. A step by step look at the various stages of a case, from the filing of the petition to the final judgment, gave the students a sense of what elements to look at while reporting on a case. At this point, Gauri played the video from the movie ‘Damini’ to depict how court proceedings are dramatised in popular culture. This was contrasted with a video of an actual proceeding in the Karnataka High Court. It gave the students a glimpse of a real court room, and how lawyers and judges make arguments in the real world.

The students were then divided into five groups and were asked to solve a worksheet on the Sabarimala Temple Entry case. The students had to use the SCO website to answer the questions organised into three categories—the Parties, the Argument and the Judgment. Part one contained direct questions designed to get the students to identify the key parties in the case. Part two was more advanced, directing the students to identify the arguments placed by the petitioners and the respondents. Part three steered the students to a close reading of the Court’s Judgment. They were asked to take note of each judge’s opinion and the reasoning they adopted. The session ended with a writing assignment for the students where they draft an article on the impact of the Sabarimala Judgment, centred on individual narratives.

The workshop was an effective way to introduce journalism students to the Supreme Court. It took the students through a journey of a case and the crucial ingredients that make up a case. The students said that it gave them an important perspective when it came to reporting anything related to the Court—be it a simple petition or a complex judgment.