In this series of posts, we are analysing the criterion on the basis of which a recommendation for the appointment of a judge is made. For an overview of the thirteen collegium resolutions on which this is based, and the method used in this series look here. In the previous posts, we examined merit, seniority, integrity and regional diversity as factors.

Of the 12 collegium resolutions that contain reasons, only one resolution has explicitly mentioned the representation of caste, gender and ‘minorities’ as a factor in making recommendations. This was the resolution from May 8th 2019, recommending B.R. Gavai J. 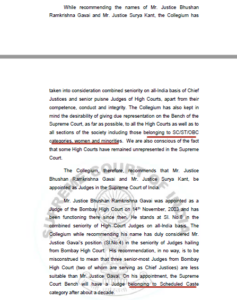 The recommendation noted that as far as possible ‘due representation’ should be given to those ‘belonging to SC/ST/OBC categories, women and minorities’. The same resolution specifically noted that B.R. Gavai J would be the first judge belonging to a Schedule Caste appointed to the Court in almost a decade.

The recent recommendation in August 2021 signalled that diversity has grown in salience: the 9 appointments included one Scheduled Caste judge, one OBC judge and three women. The resolutions did not explicitly justify these appointments on diversity grounds. However, Ramana CJI in a recent speech asserted that gender representation up to 50% was a matter of right and that other members of the collegium agreed with him.

While there has historically been a reluctance to account for such social and gender diversity of the judiciary. The upper caste and male dominance in the higher judiciary has prompted several calls to institutionalize affirmative action in the judicial branch of government. The 2019 resolution and the recent appointments could indicate a shift in the collegium’s criteria for judicial appointment that preempts more radical policies to achieve these goals.