Day 2: Courts and the Constitution Conference

The Courts and Constitution Conference was held on April 15th-16th, at NALSAR University of Law, Hyderabad.

The Supreme Court Observer team attended the ‘Courts and Constitution Conference’ held at NALSAR University of Law, Hyderabad, on the 15th and 16th of April, 2022. The event aimed to facilitate nuanced discussions on public law in India and the overall functioning of the Judiciary in 2020 and 2021.

This year’s conference was organised by the editorial team of Law and Other Things in collaboration with NALSAR and Azim Premji University.

On Day 1 of the Conference, the panellists discussed the state of the judiciary, the courts and public health, as well as intellectual property and the courts. Day 2 saw discussions on federalism, environmentalism, and the criminal justice system.

Day 2 opened by probing the Court’s varied engagement with India’s federal structure. The panel was moderated by Alok Prasanna Kumar, Co-Founder of the Vidhi Centre for Legal Policy.

Shadan Farasat, Advocate at the Supreme Court, spoke in detail on the ongoing Government of NCT of Delhi v Union of India case. Centred around the Delhi government’s challenge to the constitutionality of the Union’s Government of National Capital Territory (Amendment) Act, 2021, the case speaks to issues surrounding the separation of powers and erosion of federal principles.

Suhrith Parthasarathy, Advocate at the Madras High Court, spoke on federalism in the context of social justice policies. Mr. Parthasarathy argued that the Court may have misinterpreted the 102nd Amendment in the Maratha Reservations case. In its Judgment, the Court struck down Maratha reservations, holding that the 102nd Amendment took away the States’ powers to identify backward classes. To ensure that affirmative action policies reach diverse groups, Mr. Parthasarthy suggested that States should be given more autonomy to devise welfare measures for their communities.

Pankhuri Agarwal, a PhD candidate at NALSAR, elaborated on the federal disputes between States and the Union when it came to the Goods and Services Tax (GST). Ms. Agarwal argued that the Union’s current tax collection methods from the States erodes cooperative federalism. For States to thrive economically, Union interference in their fiscal policies may need to reduce.

Abhijeet Rawaley, Advocate at the High Court of Punjab and Haryana, and Dayaar Singla, Advocate, closed the session by diving into the Haryana Domicile Reservations case. They argued that the associative quality of Indian federalism, which allows persons from different states to come together, is weakened by Haryana’s legislation providing reservations in the private sector for domiciled candidates.

The next panel of the day, moderated by Dr. Rahul Mohanty of NALSAR, spoke to the policy and legal implications of environmental movements and the ongoing climate crisis.

Shibani Ghosh of the Centre for Policy Research pointed to the urgent need for empirical research on climate change while drafting policies. She cited the example of laws criminalising stubble burning in the NCT region, which did not take into account similar phenomena prevalent across the entire Indo-Gangetic plain. Dr. Ghosh emphasised the importance of data-driven policy making, and concluded by commenting on the receding role of the Courts in tackling climate change.

Assistant Professor Lavanya Suresh, of BITS Hyderabad, then spelled out why laws and policies on climate change needed to incorporate ‘climate justice’ to be truly inclusive. The worst effects of climate change are largely felt by the world’s most marginalised and vulnerable communities—often located in the Global South; their contributions to global warming are a miniscule proportion of the emissions from developed countries. Professor Suresh argued that all calls for climate action—particularly those from the Global North—must ensure ‘climate justice’ for those disproportionately affected by the climate crisis.

Associate Professor Geetanjoy Sahu of TISS Mumbai explored the implementation of environmental law through the prism of The Scheduled Tribes and Other Traditional Forest Dwellers (Recognition of Forest Rights) Act, 2006. Popularly known as the Forest Rights Act (FRA), the legislation vests traditional forest dwellers with their customary rights over the forest—rights that were taken away from them by the colonial and post-independence Indian States looking to cordon off large swathes of land as ‘protected areas’. In its efforts to protect this forest land, State governments have rejected forest dwellers’ claim under the FRA en masse—in the same breath, the State and Court’s sanction the same land for ‘development projects’ instead. The Act’s non-implementation across the country, thanks to the interference of the Forest Department and powerful NGOs, speaks to the State’s reluctance to recognise indigenous claims and rights over forest land.

Ria Yadav and Dylan D’Souza spoke about the role of the digital media in promoting environmental activism. They pointed to the trends in the adjudication of the Supreme Court and the National Green Tribunal, which have recently begun to pass more pro-environment orders. They ended the presentation by stressing the need to interrogate the normalisation of our dependence on the judiciary for the enforcement of environmental rights.

The final panel of the conference, dealing with courts’ engagement with the criminal justice system and civil liberties, was moderated by Professor Manisha Sethi of NALSAR University of Law.

Abhinav Sekhri, Advocate at the Delhi High Court, spoke about the need to secure pre-trial justice. Despite the existence of regulations that protect the rights of the accused in the pre-trial stage, implementation remains an issue. In this context, judicial intervention is necessary to ensure implementation of these guarantees. Mr. Sekhri concluded by stating that neutrality in criminal justice is tantamount to blindness.

Disha Wadekar, Advocate at the Delhi High Court discussed the caste and colonial underpinnings of the criminal justice system. Ms. Wadekar began by addressing the criminalisation of denotified tribes. She argued that while one may assume that the criminalisation of these tribes is a legacy of colonialism, its origins in fact lie in the caste system. While legislation criminalising denotified tribes has been struck down, persons from marginalised communities continue to be criminalised under the Habitual Offenders Act, 1956. This has a disparate impact on Dalit protestors.

Nikita Sonavane, founder of the Criminal Justice and Police Accountability Project, spoke about how the discretionary powers exercised by the police targets tribal communities. The Criminal Tribes Act, 1871, criminalised entire tribes. It was repealed and then replaced by the Habitual Offenders Act, 1956, which reproduces many of the same forms of marginalisation put in place by the Criminal Tribes Act. The police are given enormous discretionary powers under the Habitual Offenders Act. This Act has a disproportionate impact on persons from marginalised communities, with persons from certain communities constituting over half of those targeted under this legislation in Madhya Pradesh. Finally, while discussing the need for digitisation, it is important to engage with the colonial underpinnings of the criminal justice system.

Chandni Chawla and Idrish Mohammed spoke about the malaises of the prison system through the lens of their experiences as criminal lawyers at the Bombay High Court and the Rajasthan High Court. Prisoners became increasingly vulnerable during the COVID-19 pandemic. In Maharashtra, prisons were vastly overcrowded, and prisoners suffering from comorbidities were not released despite recommendations of lawyers. The speakers also pointed to how minimum wage was not paid for prisoners’ labour, differential rules between states on parole and furlough, and poor prison infrastructure.

Prerna Vij, postgraduate student at Ashoka University, spoke about vigilantism and the State. She argued that there were two ways in which the State engages with vigilantism. The first is through the State itself becoming a vigilante, and the second is through the State’s recruitment of vigilante groups. The State uses both formal (such as the passage of ordinances) and informal methods to engage in vigilantism. Lastly, police violence itself becomes more common in a vigilante state. Read about Day 1 of the Conference here. 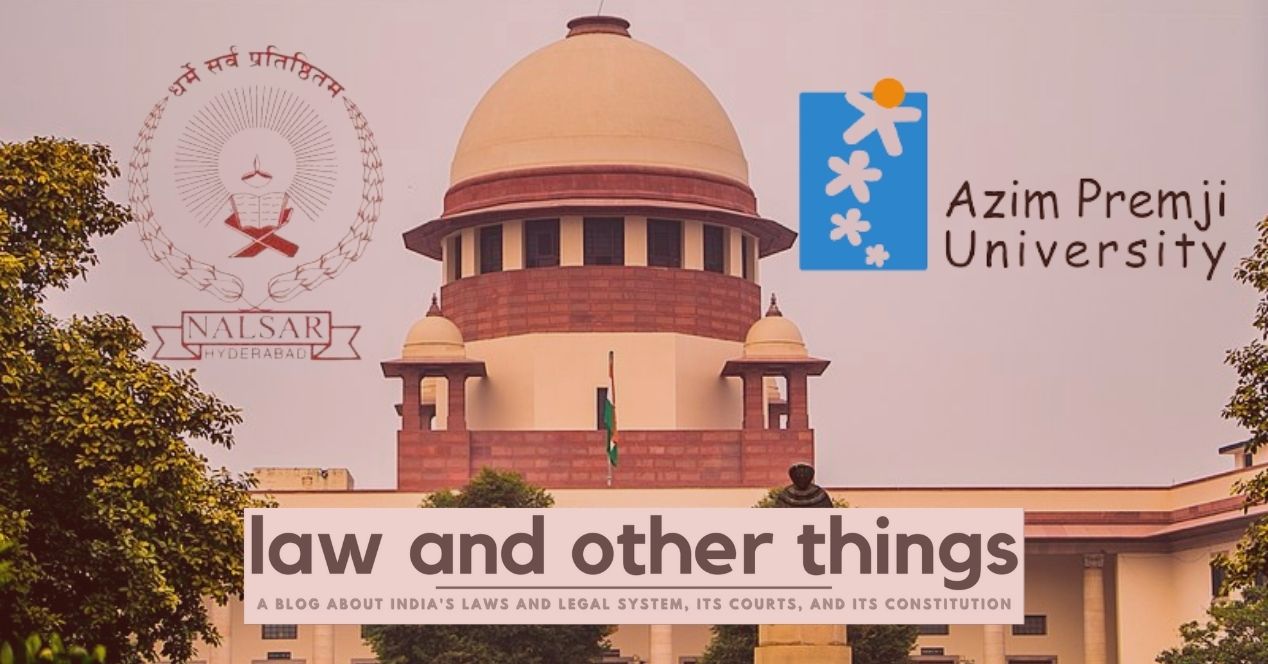 Day 1: Courts and the Constitution Conference

The Courts and Constitution Conference was held on April 15th-16th, at NALSAR University of Law, Hyderabad.