Despite being a part of 10 Constitution Benches, Justice Nazeer did not author a Judgment in any of the cases.

Justice Abdul Nazeer’s career at the Supreme Court spans almost six years during which he has been a part of multiple incredibly impactful Constitution Bench cases. Even in his final days in office, the 5-Judge Bench led by him delivered Judgments in two cases pending since 2016—upholding the Union’s demonetisation scheme and refusing to place additional restrictions on the Freedom of Speech for public officials.

Despite being a member of the Bench in 10 Constitution Bench cases, Justice Nazeer’s impact on their decisions is shrouded. He did not write a Judgment or a separate opinion in any of these cases, perhaps with the exception of the Ayodhya Title Dispute (2019) where the author remains anonymous.

Shortly after Justice Nazeer’s elevation to the SC in February 2017 he was assigned to the 5-Judge Constitution Bench to hear the challenge to the practice of talaq-e-biddat or instantaneous ‘Triple Talaq’ in Shayara Bano v Union of India (2017). Ms. Bano, whose husband divorced her by uttering the word ‘talaq’ thrice, filed a petition at the SC in 2016 claiming that the practice violated her Rights to Equality and Liberty. She also claimed that the practice was not protected by the Right to Freedom of Religion.

The All India Muslim Personal Law Board (AIMPLB) on the other hand, argued that the practice was a part of Muslim personal law and was protected by the Freedom of Religion. In their dissenting opinion, Chief Justice J.S. Khehar (the author) and Justice Nazeer agreed with the AIMPLB and suggested halting the practice for six months while Parliament framed a law to govern Triple Talaq. However, the other three Judges, who formed the majority, held that the practice was unconstitutional for being ‘manifestly arbitrary’ by blatantly discriminating against women.

Although the ruling, paved the way for other challenges to allegedly discriminatory Muslim marriage practices, its impact outside the courtroom is reportedly lagging. Many divorced women have been stuck in limbo since the Judgment, as their husbands have gone on to remarry and start new families. Ms. Bano herself is still legally married to her husband even though she claims he has since remarried.

Two years later, Justice Nazeer was a member of the Bench in another dispute that would have far-reaching religious implications—the Ayodhya Title dispute. The conflict surrounding the disputed religious site in Ayodhya conluded in November 2019 in M.Siddiq v Mahant Suresh Das when the Bench unanimously granted the land title to the the deity of the Ram Janmabhoomi temple, Shri Ram Virajman. The Sunni Wakf Board—in charge of administration for the demolished Babri Masjid which once stood at the site—was granted five acres of land at an alternate site in Ayodhya to construct a new Mosque.

As the only Muslim Judge on the SC Bench for the entirety of his tenure, his assent to the Judgment in the Ayodhya Title Dipute and his dissent in the Triple Talaq Case received widespread attention. He was titled the ‘most sought’ Judge in freedom of religion cases and was assigned an extensive security detail for fear of retaliation against him and his family.

Recognising the Right to Privacy and the Validity of Aadhaar

After retired Justice K.S. Puttaswamy challenged the constitutionality of the Union government’s 2012 Aadhaar Scheme (replaced by the Aadhaar Act in 2016), the SC referred a specific question to a 9-Judge Constitution Bench: Is the Right to Privacy a fundamental right? Justice Nazeer was a part of the unanimous decision to recognise privacy as a fundamental right in Justice K.S. Puttaswamy v Union of India (2017). He signed the majority opinion authored by Justice Chandrachud which held that privacy was a natural extension to the Right to Life and Personal Liberty under Article 21 of the Constitution.

After a 5-Judge Constitution Bench upheld the constitutionality of the Aadhaar Act, 2016 in September 2018, another 5-Judge Constitution Bench was created to hear petitions seeking a review of the Judgment in Beghar Foundation v Justice K.S. Puttuswamy. Petitioners such as child rights activist Shantha Sinha claimed that the Bench failed to consider crucial evidence in the Judgment upholding the Aadhaar Act. However, four of the Judges including Justice Nazeer rejected the review petitions in January 2021 through a short 1-page Order, stating ‘no case for review’ was made out. Justice D.Y. Chandrachud was the sole dissenting voice in both, the 2018 decision and the decision to dismiss the review petition.

The Maharashtra Legislature granted reservations to the Maratha community through the Socially and Economically Backward Classes Act, 2018. The challenge to the Act reached the Supreme Court in July 2019 shortly aftert the Bombay HC upheld the reservations but reduced the quantum of reservations. It was referred to a 5-Judge Constitution Bench two months later. In May 2021, the Bench settled the challenge in Jaishri Laxmanrao Patil v Chief Minister, Maharashtra.

While the Bench unanimously agreed that the reservations illegally breached the 50% limit imposed by the SC in Indra Sawhney v Union of India (1992), Justices Nazeer and Ashok Bhushan differed with the rest of the Bench on a different issue. They held that the Constitution (102nd) Amendment Act, 2018—enacted a month before Maratha reservations were introduced—did not take away States’ powers to identify backward classes for reservations. The majority of the Bench held that a literal reading of the Amendments’ text suggested that only the President could identify backward classes.

Scheduled Caste Status Does Not Travel Across State Lines

Justice Nazeer was a member of the 5-Judge Constitution Bench in Bir Singh v Delhi Jal Board (2018) where they considered whether beneficiaries of reservations in one State could claim reservations in another State. Justice Ranjan Gogoi authored the majority opinion. The Bench unanimously held that a citizen who held Scheduled Caste (SC) or Scheduled Tribe (ST) status in one State would not be entitled to reservations in another State. The case arose when a migrant worker with Scheduled Caste status applied for a position in the Delhi Jal Board and sought to apply for reservation benefits provided to SC persons.

However, the Bench also held that such individuals could still claim reservations in public bodies, such as the Delhi Jal Board, as they are managed by the Union government. Justice Banumathi dissented, stating that migrant SC/ST persons would only be entitled to reservation benefits in public bodies where the Union conducted the recruitment for the post.

The Constitution Bench led by Justice Abdul Nazeer delivered four Judgments during the final month of his tenure. The first two dealt with the intricacies of criminal procedure and are expected to have wide ramifications on how criminal trials are held right from the lower court stage. The first case, Sukhpal Singh Khaira v State of Punjab (2022), arose when a Sessions Court in Punjab summoned five new accused persons after delivering a Judgment against 11 people in the same case under multiple criminal legislations. These five new accused appealed the summons, claiming that it violated Section 319 of the Criminal Procedure Code, 1973.

Justice A.S. Bopanna delivered the unanimous Judgment on December 5th, 2022. The Judgment held that in cases where the accused has been convicted, the trial or sessions court can summon new accused persons until the punishment of the original accused persons is decided. However, the Court must re-examine the evidence all over again for the new accused before pronouncing a Judgment. The Judgment only marks the end of a case when the accused is acquitted.

10 days later, on December 15th, in Neeraj Dutta v State (Govt of NCT Delhi), the same Bench clarified how Courts could decide bribery cases when there is no direct evidence to examine. The case arose when a Lower Division Clerk in Delhi was caught accepting a bribe, but the complainant passed away before the trial could begin. Justice B.V. Nagarathna, who wrote the unanimous Judgment, held that public officials could be convicted of bribery under the Prevention of Corruption Act, 1988 even if there was no direct evidence of their guilt. Reliable circumstantial evidence would be enough to prove their guilt.

Upholding the Validity and Implementation of the Demonetisation Scheme

The primary concern of the petitioners was that the scheme had not been implemented properly. They claimed the Union initiated the demonetisation proposal instead of the Reserve Bank of India (RBI), as required under the RBI Act, 1934. Further, they argued that the exercise to remove all ₹500 and ₹1000 notes from circulation was disproportionate to the Union’s stated objectives.

The Bench disagreed, stating that the RBI Act must be read with a ‘practical’ mindset and that the Union and the RBI deliberated extensively before implementing the scheme. They also held that the Union’s objectives shared a reasonable connection with the measures implemented during demonetisation. Notably, neither the majority opinion nor the dissent commented on the efficacy of the demonetisation scheme, which some commentators suggest does not stand up to scrutiny.

On January 3rd, Justice Nazeer’s penultimate day in office, the 5-Judge Constitution Bench led by him decided the case of Kaushal Kishore v State of Uttar Pradesh (2022). All five Judges unanimously held that the Freedom of Speech can only be restricted by the grounds mentioned in Article 19(2) of the Constitution. Additional restrictions can be imposed only by the Parliament and not the Court.

The case reached the SC in 2016 when two victims of a gang rape in Uttar Pradesh requested the Court to transfer the investigation to a different authority. They claimed that public comments made by Samajwadi Party MP Azam Khan, calling their allegations a ‘political conspiracy’ against the U.P. government, cast doubt over the integrity of the U.P. police’s investigation. Resultantly, this violated their right to a fair investigation—an extension of the Right to Life and Liberty.

The Bench heard the case for a single day. The petitioners requested the Court to create a code of conduct for public officials until Parliament drafted a law on the subject. The Bench refused to do so, although Justice Nagarathna, in a separate concurring opinion, implored Parliament to enact a law that would restrict public officials from making such statements.

This case marked the final Constitution Bench Judgment which included Justice Abdul Nazeer as a member of the Bench. In the four decisions delivered by this specific combination of Judges, every member of the Bench authored one of the Judgments except Justice Nazeer. This sequence of decisions is indicative of a larger pattern in his SC career, where any impact he may have had on the final Judgment in Constitution Bench cases remains unknown to the public.

Justice Abdul Nazeer was the third seniormost Judge of the Supreme Court when he retired. SCO assesses the statistics of his tenure.

The Constitution Bench led by Justice Nazeer held that public officials can be convicted for bribery without direct evidence. 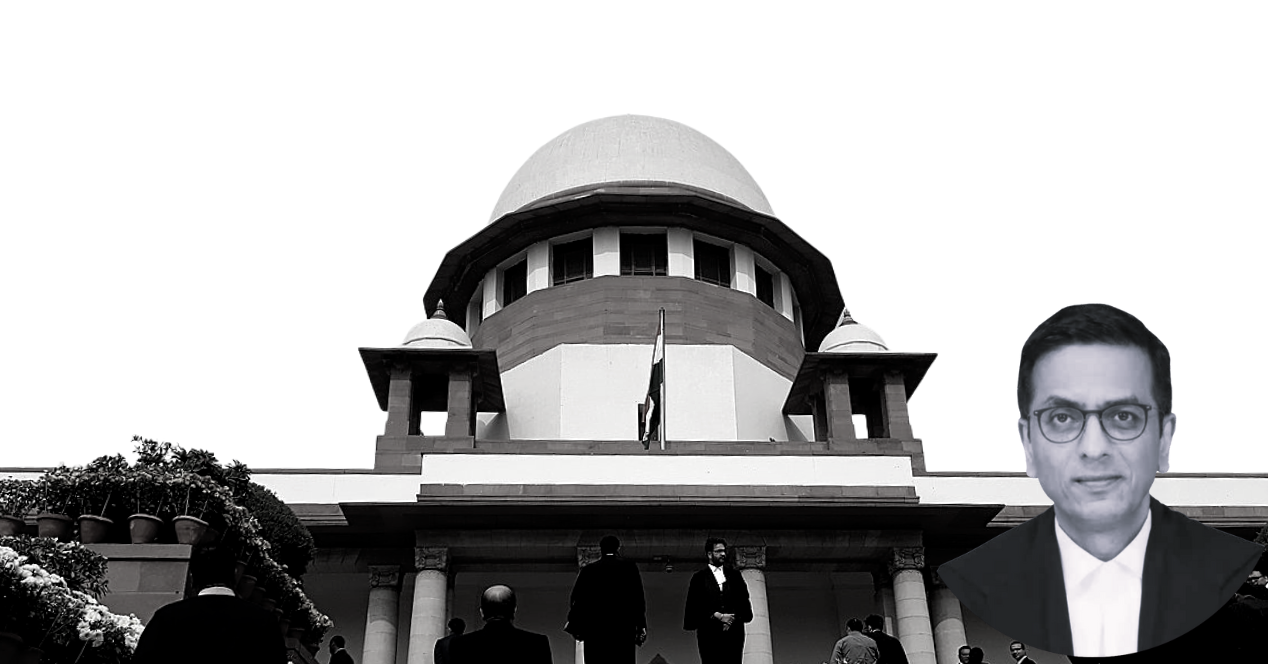 Justice Chandrachud has played a vital role in cementing right to privacy as a fundamental right, by invoking it in important Judgments