Halfway through the year a number of important cases are pending and in the process of being heard at the Supreme Court.

In addition to delivering significant Judgments, the Supreme Court Judges heard arguments in a wide range of crucial cases in the first half of 2022.

The Court made varying degrees of progress in these cases during this term. It concluded hearings and reserved Judgments in some, such as the challenge to the Enforcement Directorate’s powers under the Prevention of Money Laundering Act, 2002. Other cases, such as the challenge to Rakesh Asthana’s appointment as Delhi Police Commissioner, saw repeated adjournments and no progress.

CJI Ramana’s ambiguous Order staying sedition was most widely discussed for its effect on free speech this term. However, the Court’s balancing act between freedom of speech and security concerns isn’t confined to sedition.

On March 15th, 2022 the SC granted interim relief to Kerala based news channel, MediaOne TV and allowed them to resume operations. This came as a result of the Ministry of Information & Broadcasting refusing to renew MediaOne TV’s transmission licence and—citing security concerns—ordering a ban on their operations on January 31st, 2022. The Kerala HC upheld the ban on February 8th.

In early March, MediaOne TV challenged the Kerala HC’s decision upholding the ban at the SC. At the SC,The Union was reticent about sharing their security concerns at the Supreme Court, while MediaOne TV argued that security clearances were only required to obtain the licence—not renewal. Justice D.Y. Chandrachud stated that MediaOne was entitled to the material which formed the basis of the security concerns so that they could defend themselves. Alongside the Interim Relief, the Bench ordered the Union to file a counter-affidavit before March 26th, on whether MediaOne should be given access to the documents.

On January 19th 2022, the SC delivered a Judgment permitting reservations for Other Backward Classes (OBC) candidates in the All India Quota (AIQ) for PG medical admissions. The SC held that all reservations, excluding those based on domicile, were permissible in the AIQ. In the Judgment, the Court repeated that the concept of ‘merit’ had to be reconfigured to account for social contexts such as caste and backwardness.

The challenge to the validity of the annual income limit of Rs. 8 Lakhs to qualify for EWS reservations remains pending. However, the SC allowed EWS reservations on a provisional basis for 2021 admissions in order to meet the urgent need for new doctors due to COVID-19.

Following the Supreme Court’s decision to place Indian Police Services officer Rakesh Asthana on immediate leave from his position as CBI Special Director in 2018, due to pending corruption charges against him, the Union Government appointed him as the Delhi Police Commissioner in July 2021. The Centre for Public Interest Litigation challenged his appointment in August 2021 on the grounds that the extension of his tenure and the change in his IPS ‘cadre’ was illegal.

The case raises concerns about police reforms in India as. The SC has held (in 2006 and 2019) that police officers must have fixed tenures to shield them from political influence. In conversation with SCO, Dr. Meeran Chadha Borwankar, Former Pune Commissioner of Police,  argues that ‘‘Giving extension [to officers] beyond the age limit makes them pliable to politicians who then exploit them for their personal and party gains’. The Commonwealth Human Rights initiative reported in September 2021, that no State Governments have reformed local police rules to comply with the SC’s directive.

The matter has since been adjourned over ten times, the latest being on May 10th, 2022. The case now runs the risk of becoming infructuous if it is not heard soon—Mr. Asthana is set to retire on July 31st, 2022.

Will Special Investigation Agencies be Require to Follow Criminal Procedure

An SC Bench comprising Justices A.M. Khanwilkar, Dinesh Maheshwari and C.T. Ravikumar heard challenges to the powers of the Enforcement Directorate (ED) to investigate economic offences, as provided under the Prevention of Money Laundering Act, 2002, over 22 days between January 25th and March 10th, 2022.

More than 80 petitions have been filed in the SC challenging the ED’s broad investigative powers. The petitioners argue that the lack of procedural safeguard allows the ED to trample upon the accused’s right to a fair trial. The ED is not required to follow the Code of Criminal Procedure, 1973 (CrPC) while conducting investigations. The Union government has argued that the PMLA contains sufficient safeguards against abuse of power and ‘blind application’ of the CrPC presents the accused with opportunities to delete large swathes of evidence.

Other specialised investigative agencies like the Directorate of Revenue Intelligence and the Serious Fraud Investigation Office allegedly have similarly sweeping powers, which have also been challenged.

The Bench reserved Judgment in the case on March 10th 2022. The Judgment is expected before Khanwilkar J retires on July 29th, 2022.

On May 6th, 2022, a Bench led by Ramana CJI referred the dispute over whether the Government of Delhi or the Lieutenant Governor has administrative authority in Delhi to a 5-Judge Constitution Bench.

On March 28th, 2021 the Union Government enacted the Government of National Capital Territory of Delhi (Amendment) Act, 2021. The Amendment increased the powers of the Union’s nominated representative, Lieutenant Governor (LG) of Delhi, at the cost of the elected Delhi government’s powers. It allegedly contravenes many aspects of the SCs decision in 2018 in the case of Government of NCT of Delhi v Union of India. The SC in 2018 specifically laid out the scope of the LGs powers and held that they were bound to the aid and advice of the Legislative Assembly.

The Delhi Government challenged the constitutionality of the Amendment at the SC on August 10th, 2021. They argued that the Amendment establishes the LG as the administrative authority over NCT Delhi at the cost of diminishing the powers of the Legislative Assembly.

The Supreme Court referred the dispute to a 5-Judge Bench on May 6th 2022, despite the Delhi Government’s arguement that the Union’s request for a reference is a delaying tactic. This marks the first possible instance of a Constitution Bench convening during the tenure of Ramana CJI.

The Oil and Natural Gas Corporation Ltd. and Afcons Gunanusa are currently embroiled in a dispute over arbitrators fee’s. A Special Bench comprising Justices D.Y. Chandrachud, Sanjiv Khanna and Surya Kant will decide whether the fee scale for arbitrators under the Fourth Schedule of the Arbitration and Conciliation Act, 1996 is in need of revision. The Bench reserved the Judgment on May 11th, 2022.

ONGC is arguing that, as a Public Sector Undertaking, they do not have the same ability as private companies to pay high arbitral fees. On the flipside, Dr. Abhishek Manu Singhvi, appearing for Afcons, argues that the Rs. 30 Lakhs cap that is provided in the Arbitration Act would result in arbitrators receiving nominal fees for each sitting in long-running proceedings.

Cases that may be Appealed

The Delhi High Court is deciding whether to grant bail to the student activist Umar Khalid—accused of conspiring to incite the Delhi Riots. This case may eventually land in the halls of the SC on appeal. The Delhi High Court heard the case regularly between May 23rd – May 25th, 2022 after a Delhi Sessions Court denied bail to Mr. Khalid on March 24th, 2022.

Sr. Adv. Trideep Pais, representing Mr. Khalid, argued that the charge sheet filed by the Delhi Police misrepresented the facts and used questionable rationale to prove Mr. Khalid’s involvement, when no connection could be reasonably made between his speeches and the ensuing riots. Hearings are yet to conclude in the matter.

The SC has further given special attention to the Gyanvapi mosque dispute. In August 2021, five Hindu women filed a petition in a Varanasi Civil Court, seeking permission to worship in the mosque which was allegedly built on the razed remains of the Visheshwara temple. On April 8th, 2022 a Civil Judge ordered a ‘videographic survey’ of the Gyanvapi mosque to determine the presence of Hindu idols in the mosque. This order was appealed by the mosque Management Committee in the SC, claiming that the survey would violate the Places of Worship Act, 1991. Justice D.Y. Chandrachud noted that such a survey by itself would not affect the ‘religious character’ of a place of worship and the Bench ordered that the case be transferred to the more ‘seasoned hand’ of a District Judge in Varanasi.

On March 15th, 2022 the Karnataka High Court issued a Judgment upholding the order of the Karnataka Government which banned students from wearing hijabs in public educational institutions. The HC held, in a Judgment heavily reliant on the writings of B.R. Ambedkar to justify the ban, that wearing hijabs was not an infringement on Freedom of Religion. This marked the end of a two-and-a-half month saga beginning with the Government PU College in Udupi refusing entry to students wearing hijabs, followed by the Chairman of the College Developmental Committee passing a resolution to the same effect.

However, a new chapter may yet be written as the High Court Judgment was challenged in the SC on the same day it was delivered. On April 26th, 2022 Chief Justice Ramana agreed to list the pleas. 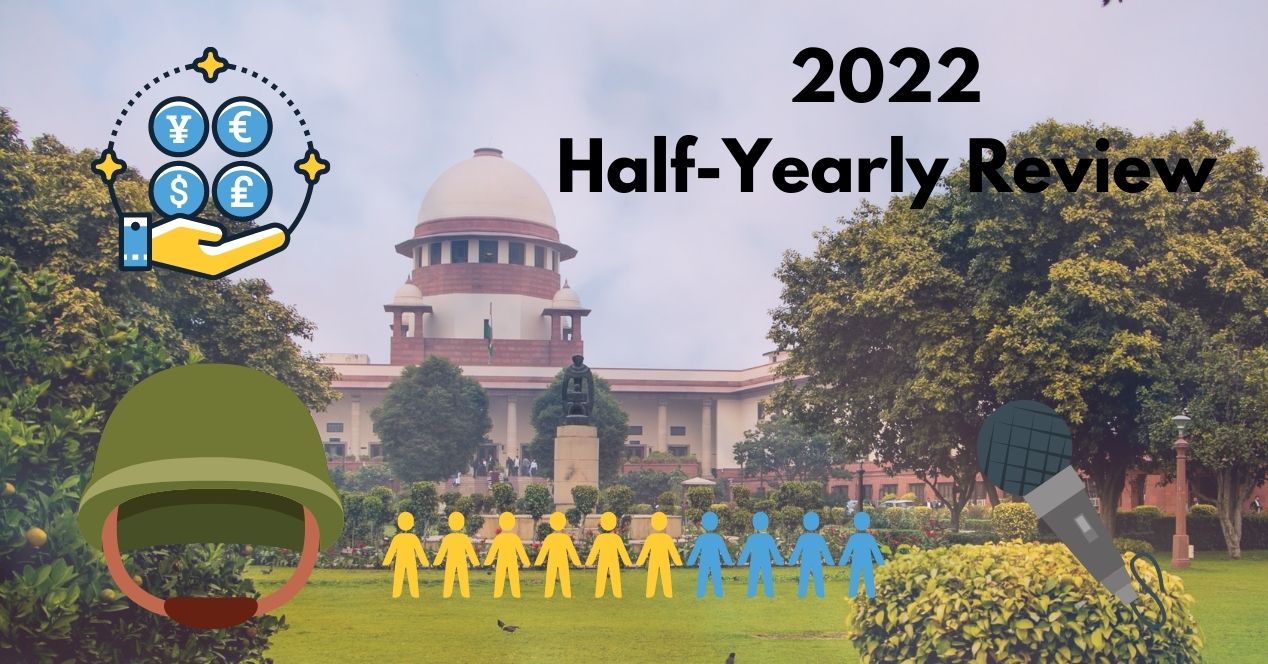 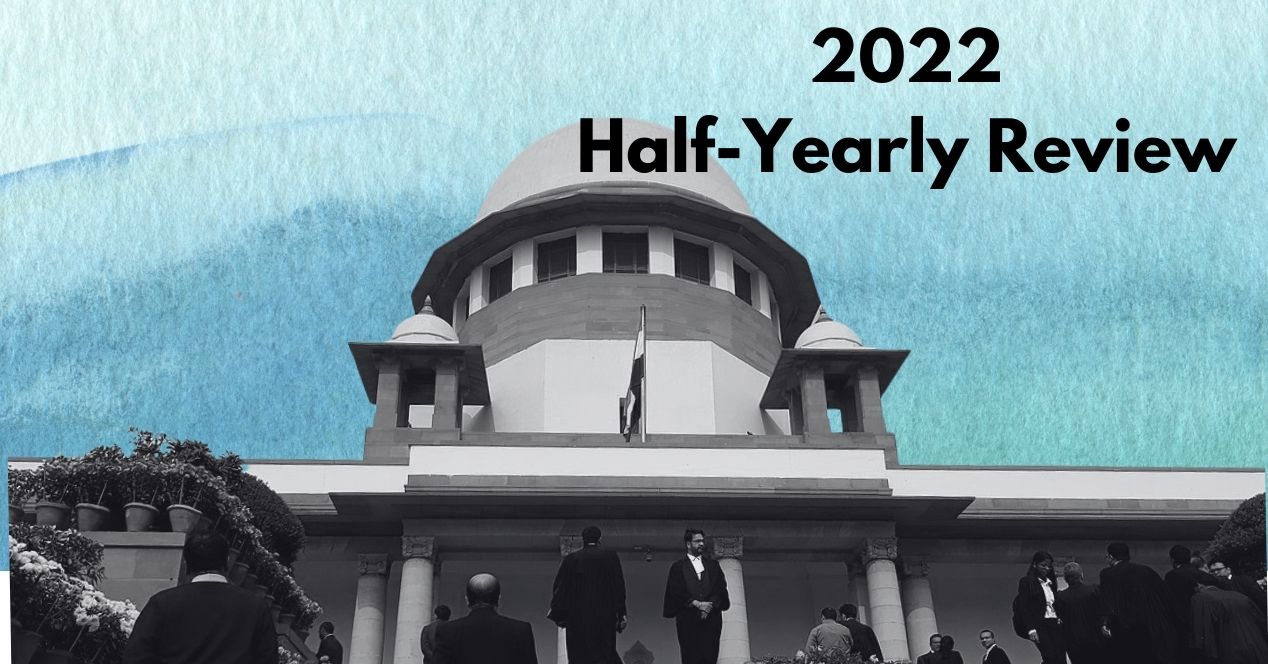